For a the past year or two, I’ve been wanting a nice shredder guitar. Two of my favorites on the market right now are the Washburn N4 and Guthrie Govan Charvel. If money wasn’t an object, I’d likely just purchase several of each. …but …..yeah, not going to happen. Since my last attempt to merge the characteristics of two guitars worked really well (strat & jaguar), I thought I might get exactly what I want by trying to merge these two.

I’ve posted on this in the past, but basically the N4 is great except there are a couple of things that I don’t like about the guitar. The small, dinky style body isn’t for me and neither is the tilt-back headstock. The Govan Model pretty much addresses these plus has the brilliant idea of mixing the non-fine tuner Floyd w/ a traditional nut and locking tuners. This basically fixes the reservations I’ve had around going back to a floyd-style bridge.

I want to use the dual humbucker (L500XL & Duncan ’59), toggle switch, and alder/ebony woods from the N4 as the foundation for this build. The body & neck should be more like a traditional strat-styled.

I thought I was going to settle for an N4 clone, but mainly due to the scale issues I explored in this post, completing my other N4 project guitar will require a significant time investment and more money than I’d planned to spend on it. I’ve also been sitting on a pile of hardware that I’ve been dying to install & use. So on a random Friday afternoon and in a moment of weakness, I stumbled upon a Warmoth showcase body and neck that gives me practically everything I was looking for to scratch my shredder itch. This was also the least expensive option on the table, and being familiar with their quality, I had a pretty good idea for how it would turn out.

Look at the grain on this piece of alder! And OMG the toggle switch exactly where I want it!!!! Alder isn’t know for having stunning grain like Ash (or many other species), and it’s not very popular for natural or transparent finishes. …..but the grain on this cut rivals my other ash guitars. Weighing only 3.6 lbs also makes this a particularly light body. Combine those details with the toggle switch on the lower horn and basically it was impossible to pass up. The only nit picks I have are 1) I’d rather it not be drilled for the standard strat knobs 2) not have the recessed floyd route and 3) have a contoured heel. Ultimately, none of these issues were deal breakers and easily out weighed by the things that were right: grain, weight, pickup & trem routing, toggle switch placement, etc.

I had originally wanted to go with a roasted maple neck on this guitar. I didn’t find anything that blew me away in the showcase so I started looking at the padauk necks. Bam! I found a nice looking piece with the correct scale (25.5), profile (standard thin), and compound radius. This one also has a beautiful ebony fingerboard. This is the first time I’ve owned an exotic wood neck like this. 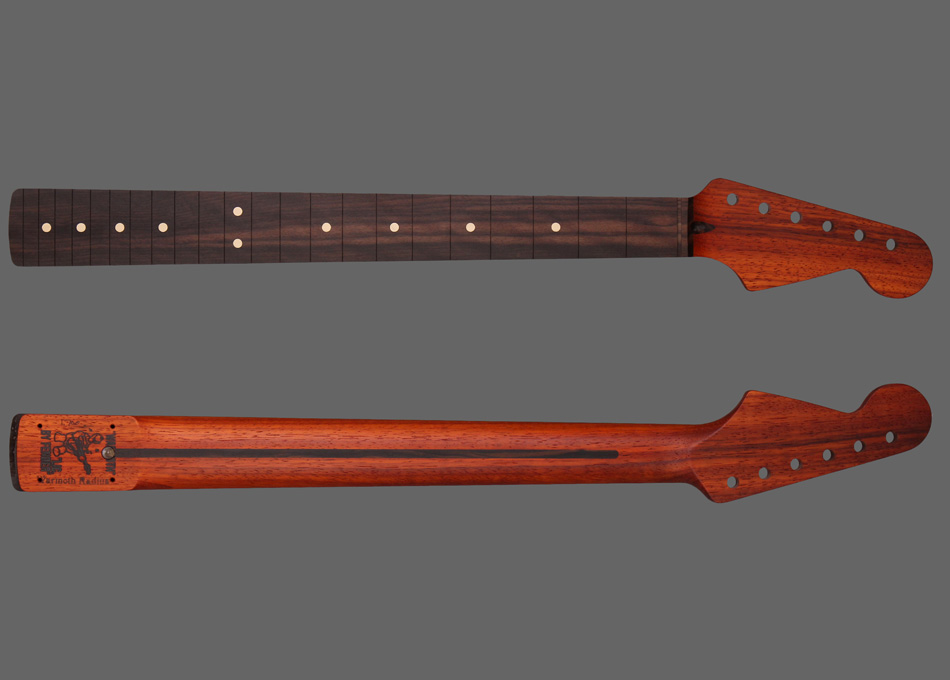 Padauk is not near as well known as maple for necks, but it’s a very common wood for N4s. Nuno was playing them a lot during the III Sides to a Story era of Extreme. It’s a gorgeous, darker wood that can be difficult to work with because a lot of people are allergic to the oils in the wood.

I wanted the largest frets I could get on this guitar, but when I placed the order I let Warmoth talk me into the 6150 size. This is the same size I have on my tele & strat and I really like it. In hind sight, I probably should have stuck to my guns and just got the 6100s.  Anyway, the stainless steel frets and it turned out really nice. Warmoth did a much better job completing the frets ends, and no additional filing was needed. My other necks required a lot of filling and sanding to get the fret ends smooth. I won’t need to do anything to this neck accept bolt it to the body and add the tuners.

I’ll keep documenting the progress on this build. Stay tuned!