I’ve had my Tom Anderson Hollow Drop Top Classic for about eleven years now. It’s by far the best guitar I’ve ever owned. Over the past three years, I’ve found myself playing this guitar less and less as my tastes continue to evolve. In fact, my strat has been my main guitar for the past year and a half. Back when I purchased the Anderson I really gravitated to higher output pickups. Not so much any more. When I started playing teles back in 2004ish I realized that lower output pickups had a much sweeter & brighter sound. Conversely, hotter ones can sound harsh and darker. I’m not saying that all high output pickups are dark & harsh, but they certainly *can* be as is the case w/ the pickups in my Anderson. I ordered this guitar w/ an H2+ in the bridge and SA1R & SA1 in the neck & middle. I’m still a really big fan of the SA series pickups (I’ve also heard the SCs are amazing as well), but the H2+ is pretty much the opposite of what I’m looking/listening for in a pickup these days. I’ve also had guitar envy over the way the covered pickups look in Anderson guitars.
Here’s an example:

Anyway, Dimarzio’s first made it back on my radar a few years back when I got an old set of Twang Kings from local legend Sam Swank. My tele sounds amazing and a lot of it has to do w/ these pickups. When I was building my strat I was planing on using Fralins, but I stumbled across Dimarzio’s Area pickups and decided to try them. The Areas are very affordable (~$60-70) compared to other manufacturers, they’re completely silent, and simply put, they sounds amazing. ….especially through my Naylor. This is the reason I’ve been favoring my strat for ever since I got it.

The whole thing hit the fan for me in late November when I was doing some recording. I really wanted to use my Anderson to lay down a part. I A/B’ed both guitars, and the engineer and a friend of mine looked at each other then back at me and they simultaneously said, “No, use the strat.” That’s when I new it was time to make some changes.

I knew I wanted to stick w/ the Areas for the neck and middle, but I wasn’t sure about what to put in the bridge. I sent an email to Dimzario and I was amazed at how responsive they were. I probably had 8 back and forths w/ them and they answered all of my questions. I ended up getting an Air Classic Neck (F-spacing w/ cover) in the bridge, an Area 67 in the middle, and the Area 58 in the neck. I wired it bridge (series, split, parallel via the DPDT switch), split bridge/middle, middle, middle/neck, neck, w/ an add bridge push/pull master tone. I stuck w/ 250k pots and a 47u cap. The switching is true to how Anderson wires things, except for the parallel option. I have to say that I’ve really been getting into that sound lately.

Another thing that’s great about Dimarzio is they’ll give you 30 days to make sure you like the pickup(s) you purchased. If they don’t work out they’ll swap the pickups until you find a model that fits your rig. Considering the tone, price, and customer service (I love it when companies stand behind their products), I’m pretty much sold on Dimarzios and this will be my default pickup company for the foreseeable future. Don’t expect a standing ovation from the cool kidz on the The Gear Page or anything, but they’re still amazing pickups. 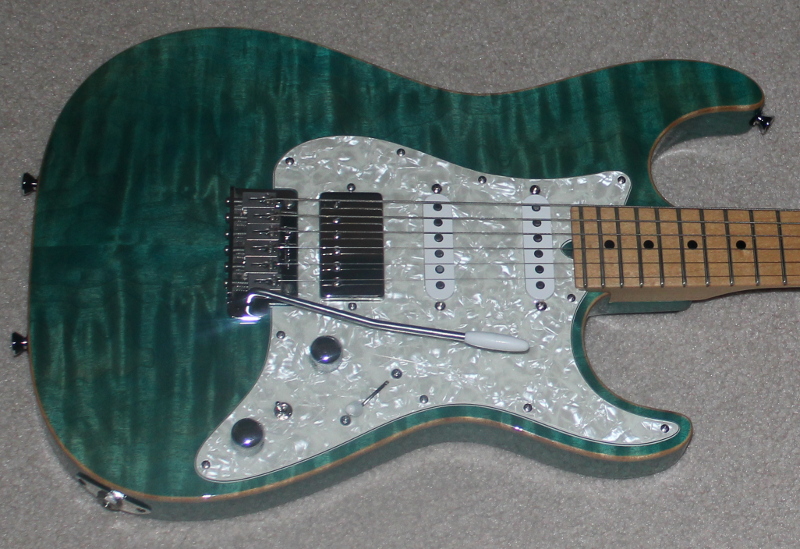 So far I’m really liking the sound of my Anderson. I’ll need a little more time to tell if I like the 67 in the middle or if I want to swap it for another 58 like my strat. Regardless, it’s a huge improvement.