The whole time I’ve been working on this guitar the question in the back of my mind has been: is this cheap thing going to actually sound, play, and function like a “real” guitar? I’m at a point where I can’t make any real progress for a week or two but I this afternoon I thought maybe I should mount the bridge and neck, string it up, and see what she’s like. So I did. 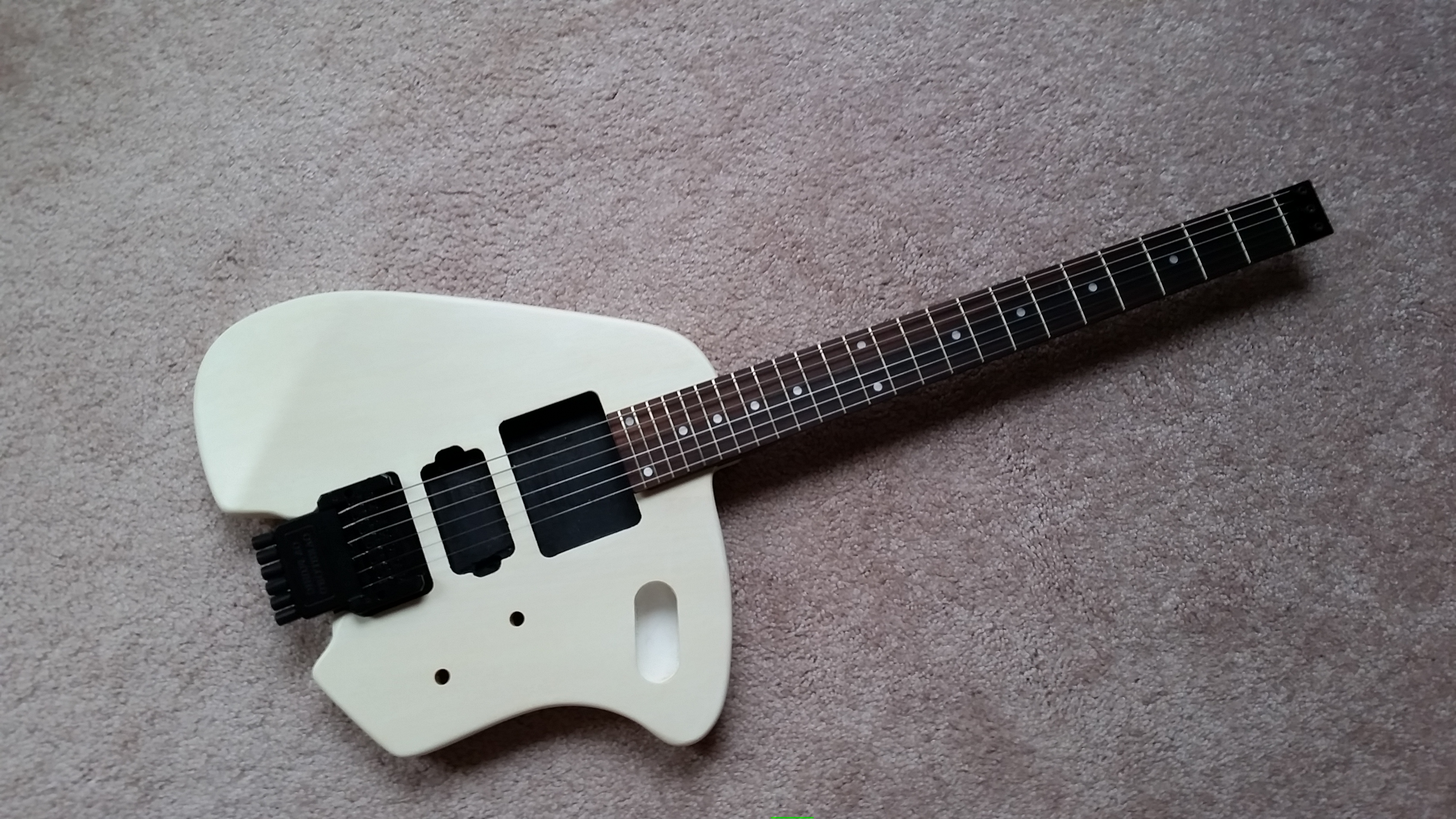 The bottom line is I think this is going to become a really nice serviceable guitar, but there’s a long road ahead to get it up to snuf.

The kit came some generic light strings; I’m guessing a set of 9’s. I strung it up and noticed three issues immediately. The nut, or headpiece, is junk, the tuners on the bridge are really difficult to turn when you get close to pitch, and it sounded much more like a sitar than a guitar. After about 5 minutes of struggling to tune it, the high E string broke at the bridge. I decided to try a good set of strings, and luckily that fixed the sitar sound I was getting. I believed this was caused by the faulty placement of the nut. 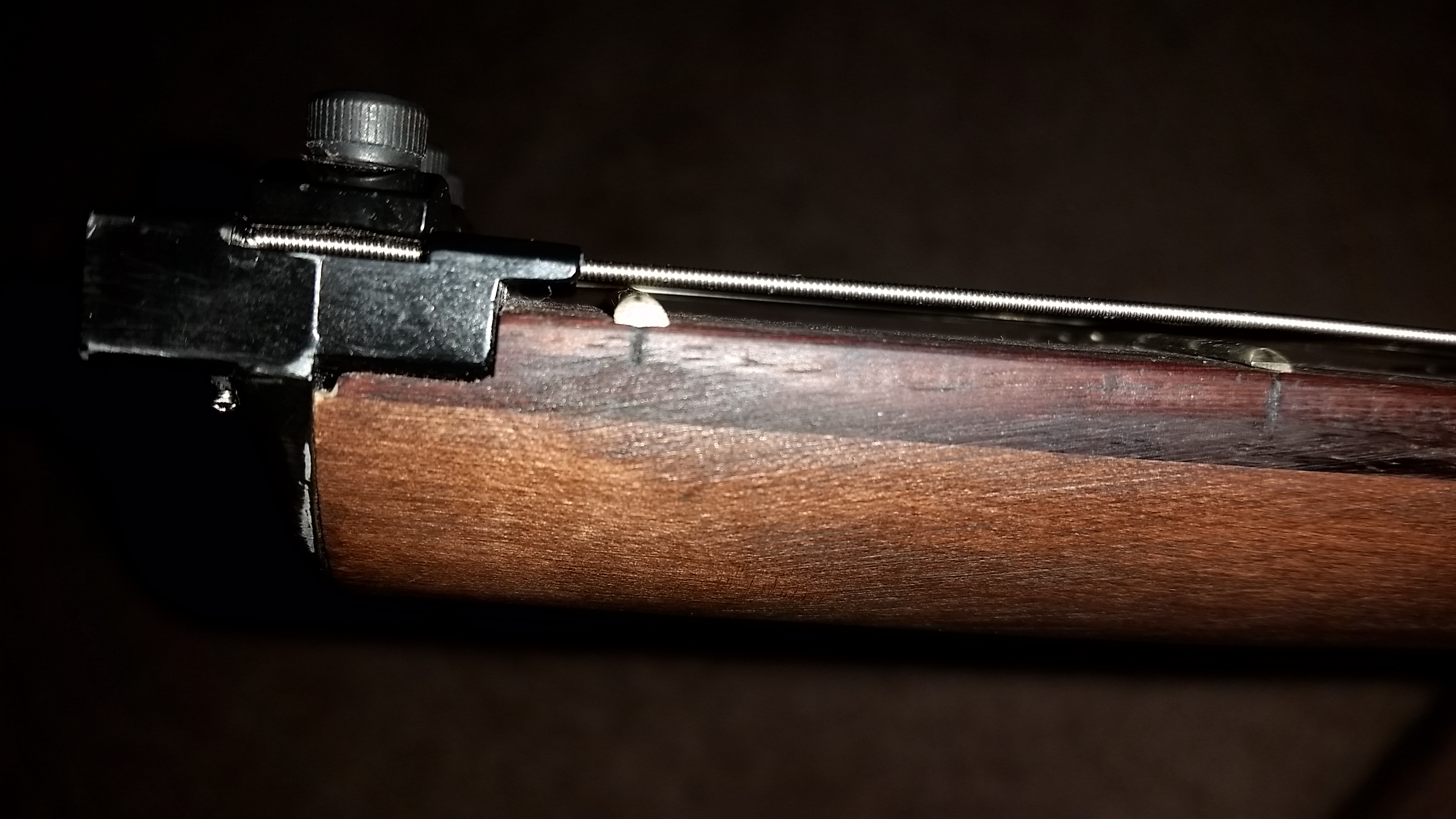 I had a feeling the nut on this guitar probably wasn’t going to cut it, and sure enough that’s the case. These necks have a zero fret and the strings need to rest on that fret so it acts as the start of the string. If you look closely at the pictures you can see the strings don’t touch the fret at all. The metal nut needs to be sitting several millimeters deeper in the neck to function properly.

The guitar can really only be tuned by fretted notes in it’s current state. All open strings are close to a quarter tone flat. Just to get the point across I recorded something really quick with my cell phone to make the point:

Even if this nut was installed properly I likely still wouldn’t like it. There are hex screws on the end to lock the strings in place, and then Floyd Rose style locking nuts on top to secure the string (this one is not compatible with double-ball strings). It’s not a terrible design, but it leaves a lot to be desired. First, the hex screws on the end work perfectly on the lower strings, but are completely ineffective on the higher strings. No matter how tight they are, the strings move quite easily through. It appears the hole in which the strings pass is too large and nut can’t reach the string when it’s fully tightened. This means the locking nut is the only thing keeping the higher strings in place. Which brings me to my next gripe. On a locking Floyd nut there are metal string guides that are tall enough to hold the locking pieces in place as you tighten them. That doesn’t exist on this. It was very challenging to keep the strings pulled taught, attach & tighten the locking piece, and keeping it aligned and the strings in place with just two hands. It was so bad I ordered one of these immediately: http://www.headlessusa.com/jcustom-headpiece      I was hesitant to do that as it’s close to the price of the guitar, but frankly I’ve been doing this too long (and I’m too old) to tolerate bad hardware.

A replacement bridge for this guitar is very pricey. Even though the included one has some issues, I’m going to try and make that one work for a while. The frets ….feel cheap as well. I’m hoping that a good polishing will fix this, but it’s possible I might re-fret this neck at some point. I would love to learn how to do fret work anyway so this might actually be a good thing.

So, while I’ve been really negative in this post, the good news is despite these problems, the guitar is really fun to play. Also, these are all solvable problems. I remain optimistic that I can fix most of these as I complete the build and I’m excited to continue to make progress.