The following combination of strat mods is simple to install and greatly increases the tonal palette of the instrument IMO. This requires giving up the traditional 3rd position (middle pickup), but that’s a small price to pay.

I recently borrowed a friend’s Jaguar and really enjoyed some of the unique sounds that are possible with the guitar. Of course this made me want to rush out and buy one almost immediately, but that’s not going to happen any time soon considering I recently got another Tom Anderson guitar. …..but I’ve still been eyeballing the Johnny Marr signature model. Anyway, this got me wondering if it was possible to add some jaguar-ish tones to my strat. 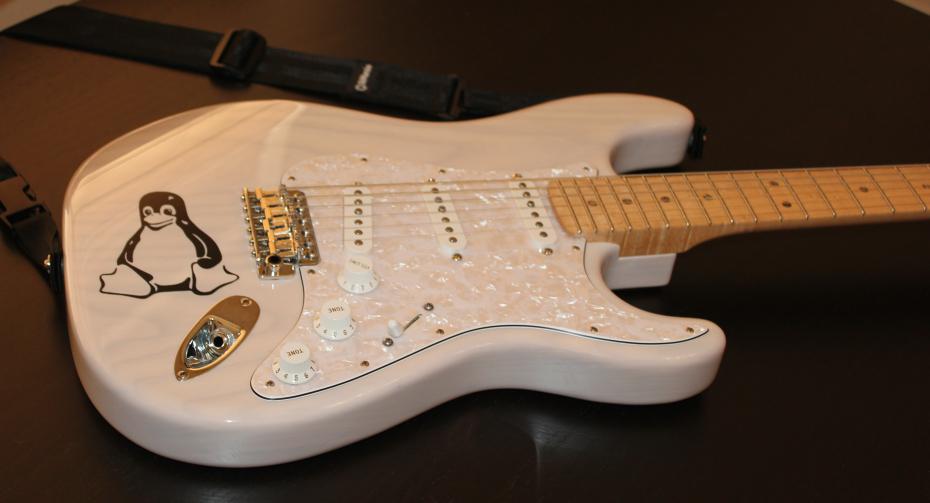 My strat is a Warmoth, Mary Kaye white parts-caster. I was inspired to put this together after listening to lots of John Frusciante’s playing on Blood Sugar Sex Magic. Coincidentally, he’s also a fan of Jaguars. I wanted a classic strat, but with a few modern improvements like locking tuners, stainless steel frets, compound radius fingerboard, etc. I was planning to use Fralin or Lollar pickups, but I decided to take a chance on some Dimarzio Area pickups instead. ….best move ever! They’re inexpensive, completely silent, and sound incredible. The 58s are my favorite, and I also enjoy the 61 in the bridge. These pickups worked out so well that I ended up neglecting my main Tom Anderson axe for about a year until I swapped it’s pickups w/ Areas as well.

At first, the only change I made to the traditional strat wiring is with the tone knobs. Strats traditionally connect the first tone knob to the neck pickup and the second one to the middle. This is useless, as the bridge pickup needs a tone pot far more than the other two pickups. It’s simple to connect the first tone knob to the neck & middle pickups and dedicate the second one to the bridge pickup. This is perfect for me as I typically leave the N+M one wide open most of the time and the B one between 7-9. Legend has it Eric Johnson does something similar.

A lot of guitarist, dare I say most, ignore the tone knobs completely. I can understand that, especially with humbuckers, but players who do this are missing out on so much. Guitarists like Joe Bonamassa, Eric Johnson, Scott Henderson, all the way to Eric Clapton are heavy users of the guitar’s tone controls. Is it a coincidence that these guys are famous for their great tone? People! Let’s use these knobs!

So I mentioned earlier that I typically leave the bridge tone set between 7 & 9 depending on the amp and sound I’m going for. What really opened my eyes to the potential here was something I stumbled upon during a recording session a few years ago. I was going for an ambient melody sound w/ medium gain & lots of delay. I found that using the 4th position, bridge + middle, with the bridge tone control at 8 and the middle tone around 4 or 5 added a beautiful warmth to the tone without sacrificing any clarity. This thick, complex sound works in so many settings and it’s impossible to get on guitars that only have a master tone.

Jagging up the Strat

The default strat wiring is brilliant except it lacks the N+B combination. Think middle position on a tele sound. The most common way to add this to a strat is with a push/pull pot to either add the bridge or neck pickup. This is often referred to as the 7 sound strat. It’s a great mod and I’ve used it for years on several guitars. The problem I have with it is the push/pull pot is a bit out of the way. In fact, it’s so far out of the way that every guitar I’ve had with this configuration resulted in me pretty much never using the N+B setting.

You know what else I never use on strats? Position 3, with just the middle pickup. It’s actually a really nice sound, and players like Stevie Ray Vaughan used the middle pickup so much that some say that was his signature sound. That said, I just never hear a guitar part in my head and want to use the middle pickup to play it. Ever. …but I do want to use the bridge plus neck pickup on a regular basis. I always associate this sound with a tele, but using both pickups simultaneously on a Jaguar is awesome.

The other thing I really dug about the Jag’s electronics is the strangle switch. This is a very simple circuit that would have been incredibly handy to have available over the past twenty-something years. It’s not something I plan to use on every tune, but it can make the guitar really sit nicely in the mix for any clean-ish, Motown vibe.

A Little help from my Friends

I sent the good folks at Dimarzio an email describing what I was after and asked a handful of questions. They responded immediately, and after a couple back & forths with clarifying questions, they provided the diagram below. I love it when companies stand behind their products and offer top-notch support like this. Thank you to the good people at Dimarzio! I hope this one gets added to the web site.

Jack pot!!! This diagram gives me pretty much everything I wanted.

For now, I’m very happy with these tweaks, but I do need to test it out more on gigs.

It would be nice to figure out a way to add a switch of some kind that can preserve the original 3rd position. This way I wouldn’t be sacrificing anything from the traditional wiring. I’d also like to find a way to add either an out of phase switch or maybe an option to run the neck and bridge in series. Right now the tone knob assignments make this challenging and I’m not willing to compromise here. Please comment if you have ideas for other complimentary mods.