I decided to get Audrey a PC for her fourth birthday. She’s a little too young for it, but I really want to get both our girls exposed to technology at an early age. Another goal is for them to learn to touch type at an early age. Anyway, I didn’t really want to spend a lot of money on something that’s likely to get broken. I figured a netbook would fit the bill perfectly. Lucky for me my brother-in-law wasn’t using his old Eee PC 900, and gave it to Audrey for her birthday. To make this more fun I went with a Hello Kitty theme on the system. It’s running Fedora 19, XFCE desktop, sugar, KDE Education Project, and a home page of pbs.org.

The system is great, but the 900 MHz CPU & factory SSD are kind-of slow. I wasn’t aiming for a tool to teach patience. I can’t change the CPU, but the SSD is something that’s easy to change. ……or so I thought.

Amazon has a couple of replacement drives, one was ~75 and the other was ~40ish. I opted for the cheaper one and was surprised to learn that it was a different size from the original. Apparently there’s a 50mm & 70mm standards of this type of drive. The new one fits perfectly, but is too short to attach to the built-in posts.

The laptop’s cover can depress the card and everything works just fine. This didn’t sit well with me because there’s nothing to keep the card inserted if the laptop gets dropped. Some of the other cards have an extender, but I couldn’t find one available for purchase. 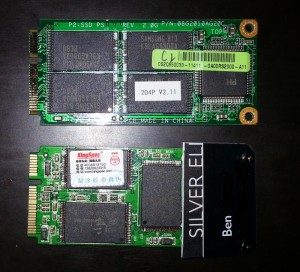 I finally found a good use for my Marriott Silver Elite card. I figured I could trim this down, drill a couple holes, and use this to hold the SDD in place. 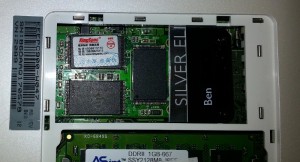 This worked really well except that it pushed the SSD down further so it makes contact with the motherboard. Nothing shorted out and it worked fine, but the system runs really hot and I didn’t want to have any heat issues. 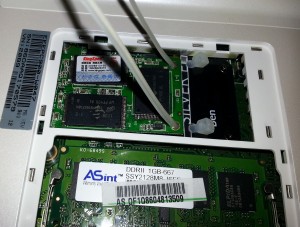 I figured I could trim the card down to 20mm, drill two more holes, and attach it with zip ties.

……and blamo! It’s a poor man’s 70mm adapter. The drive is working perfectly and it’s an incredible performance boost to the system! On a more important note, Audrey has really been enjoying Klettres the past couple of days. This game really helps children learn the alphabet and keyboard at the same time. She’s not only getting faster at finding letters, but also learning the letters themselves. The under-powered CPU struggles with some of the HD flash content on PBS.org. I’m sure we’ll eventually move to a better system, but for now this one is working out better than expected.