Over the past several years I’ve made several upgrades on my tele and I never took the time to write about it. I recently switched my saddles again and I figured now would be a good time to document this.

My tele started with a standard Gotoh tele bridge with modern “strat” style saddles. These bridges are excellent and it served me well for ~10 years. …until I played a Suhr tele w/ the Wilkinson (by Gotoh) WT3 bridge and it spoiled me. …a lot. 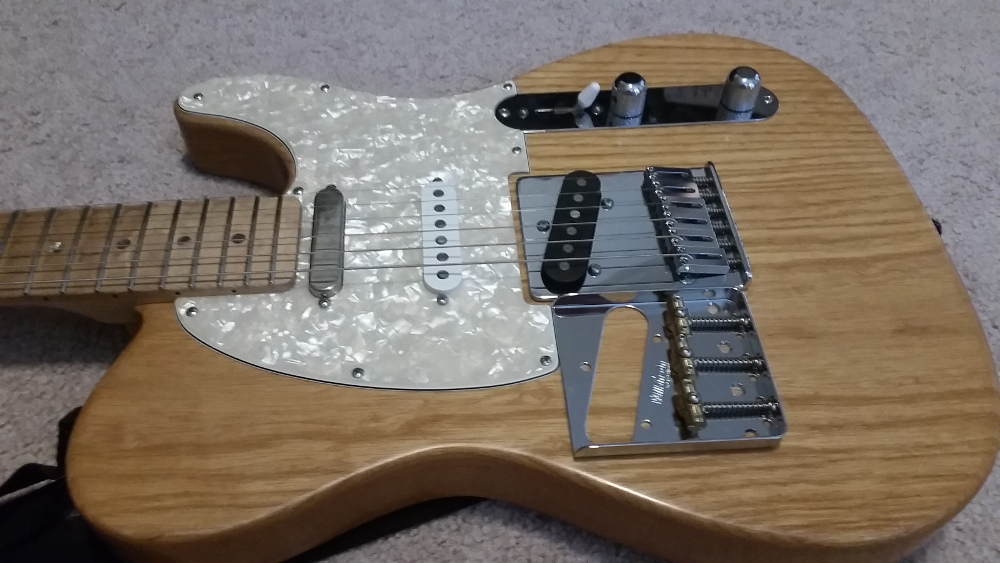 There’s a really neat vibe that’s unique to the ash tray bridge with brass saddles. I also really liked how the saddles can be adjusted for intonation purposes. The Suhr I played, known as the Classic T Antique, also had aged/distressed hardware. I don’t dislike the bright shiny chrome plates, but it does annoy me how it looks when it gets finger prints & smudges on it.

Since I have never attempted any relic’ing in the past, I turned to the canonical source for all information: YouTube. This video had a nice process that yielded a nice result and didn’t look to difficult. The muriatic acid seemed to dull the metal a bit, but it didn’t look near as nice as the Suhr, which almost had a “brushed” metal look. I thought I might be able to achieve something similar with sandpaper. I tested the underside of the control plate by moving it two different directions on 220 paper and then with 400 grit. Below is the before shot:

This is exactly what I had pictured in my head and I’m glad it worked out. I later tried to repeat this process on another control plate and it turned out terrible. Maybe this was beginners luck.

Now, this guitar started it’s life with two pickups and a 3-way switch. I then went to a 4-way w/ the added serial option, which I didn’t like at all. Then I had the middle pickup slot routed. The tech I hired to do that work ordered a different pickguard that already had the middle slot cut. While there wasn’t anything structurally wrong with the new one, the pearloid was a very bright white, and I prefer a softer slightly yellowed pearloid. What’s shown in these pictures is a genuine Fender pickguard that I originally bought for an old Mexican tele and I cut a hole for the middle pickup. I think it turned out great and looks much nicer than the other one.

A pair of Dimarzio Twang Kings mixed with a Van Zandt Blues give this guitar a 50’s style sound, but with a really cool 2 & 4 strat quack sounds. I really like how the hotter Van Zandt blends with the Twang Kings; no other guitar sounds like this. Originally the tone pot had an add-bridge push/pull (and push/push at one point) potentiometer. This is a great configuration, but I found I wasn’t using the neck+bridge sound much, if at all, because it’s inconvenient compared to the other positions on the switch. Since I never use the middle pickup by itself, I decided to move to a N,N+M,N+B,M+B,B setup. Later I learned this is common for Nashville style teles.

It’s not possible to wire a regular 5-way switch like this. Schaller makes several switches that are designed with altered wirings in mind called Megaswitches. They make one that does exactly what I needed. The unit has a PCB board and the switch was crazy stiff. ….like it hurt my hand to move it. I went ahead and installed it thinking it would loosen up and be fine, after all, it’s a high-end switch right?! What a piece of crap this is! After a day it went in the trash. I do not recommend using these. Honestly, I’ve never had good luck with recent Schaller hardware, and this did nothing to change my opinion of them. (I’m a Gotoh guy)

Unfortunately, a nice super switch is too wide to fit in the control cavity on a tele. While looking for online, I discovered that a 2-pole 5-way switch exists. It’s basically half of a super switch, which are 4-pole. I picked one up an Oak-Grigsby one from ToneShapers for a very reasonable price.  I also sprung for some new CTS 250K, solid shaft pots.

The results of this work turned out really nice. The new bridge improved the traditional feel and sound, but I didn’t like how the saddles felt on my palm. These have an hex nut at the top that protrudes from the saddle and it’s just not comfortable for me.

I keep up with Tom Anderson Guitarworks on Facebook and a few weeks ago they launched their tele Icon. I immediately noticed they were using different saddles and the ash tray is notched. Looking at this post it’s easy to see these are the Gotoh compensated saddles. I avoided these initially because I didn’t think the fixed offset would intonate perfectly …..but if Anderson is using them ……I’d be an idiot not to try them, and I’m glad I did. Stewmac sells them here.

The screws ended up being a bit too long for this guitar. In truth, I could probably live with the included screws, but they make me nervous so I’m going to change them. I found a thread on tdpri.com where someone else ran into the same problem. He ordered ones that are 5mm shorter; specifically a M3 x 25mm. He had to buy a qty of 100 and offered to ship them to others if needed. He was kind enough to send me some and I hope they arrive soon.

My parting thought is these Gotoh saddles are definitely the best I’ve used. I fell back in love with this tele over the weekend and it’s nice to feel excited about an old friend again!